Ferment Fortnight kicks off its biannual explosion of work-in-progress and scratch performances from 24 Jan. Here, The Paper Cinema’s Artistic Director Nic Rawling gives us an insight into his lunch time talk How to Grow a Story. Catch it at the Watershed, Fri 26 Jan.

Tell us a bit about yourself…
I am a Dorset born son of a commercial artist, conservationist. I’m an illustrator, gardener come odd job man and one of the founders of The Paper Cinema, a company based around the melding of visual and musical storytelling coming out of the D. I. Y.  lo-fi tradition.

What are you presenting at Ferment Fortnight?
‘How to Grow a Story’ is a lunch time talk on the making and remaking of a new original narrative piece. The ongoing process of trying to make new full length piece with no text to drive plot to explain action and general expositions. Should we use the all to pervasive 3 act structure? – or is it ok to lose the audience for the poetic rather than literal meaning? When devising in a group how do you edit without treading on peoples toes/emotions if you’re all making the story?

Prior to the talk I will have spent two days in the company of ace animation and puppetry director Joseph Wallace, during which time we will be aiming to structure the piece and answer some of the questions our unique medium leads us to ask.

What inspired/influenced your piece?
This was supposed to be our B-Movie, Rupert the bear meets Indiana Jones was the original pitch. We’re aiming for something, action packed, esoteric, highly visually driven and fun – Tintin and Buster Keaton in pacing and visual beats- 1920’s big band jazz mixed Hollywood Classical era score – with a bit of hot club jazz thrown in.

What does the work that Ferment do mean to you?
Newness – is all I can say as I don’t live in Bristol and haven’t attended before.

What would you say the audience can expect in three words?
Doubt, conviction, ideas

Ferment Fortnight takes place at Bristol Old Vic 24-25 Jan before moving across the city to Watershed and Loco Klu from 26 Jan-3 Feb.  For more info and to book tickets, click here.

Edward Rapley is a Bristol-based performer who has trained in Paris with Phillippe Gaulier (the French Master clown), is a member of local artist collective Residence and has toured to audiences all over the UK. This September he opens our Autumn season in the studio with The Self Trilogy: 10 Ways to Die on Stage, The Middle Bit, and Who Know Where. His work defies expectation and offers his audiences a new fresh take on the big (death) and the small (atoms). Intrigued, we interviewed him via long-distance-electronic-internet-based-communication (email) to find out what it’s like to perform your own life on stage by yourself.

Tell us about the trilogy.
The trilogy is this sprawling piece of work which I’ve been making for the last seven years. Very simply it is three solo shows I have been inspired to make by events or times in my own life as a way to communicate with other people, to share what are perhaps common mistakes and joys.

Describe them in three words (three words for all of them!)
Ridiculous, touching, hopeful.

What’s it like performing autobiographical work?
It makes me laugh at myself which I like. When you use your life as the source for a performance it’s important that you do it for the audience and not yourself. That avoids a lot of potential problems. That’s why it’s great working with Holly Stoppit on the shows, she’s got a great eye for the audience and the ability to get me to where I need to be.

Is much of your work a solo performance? What’s it like always performing by yourself?
Almost all my own work is as a solo performer: on stage, with installations, or one to one games. It is both terrifying and exhilarating. Before the performance I get so nervous, even now with a month until the shows I’m scared. Then when I step on stage everything falls into place and it’s just so much fun. I also work as an actor for other companies and it is great to have other people to play with on stage and to share the experience with.

What is your favourite moment in the trilogy?
It’s the bit between stepping on stage and the bow. Cop out! I really like the balloon bit in 10 Ways, the start of The Middle Bit and the path of all my atoms in Who Knows Where. As a solo performer I get to make the show out of all my favourite moments, that’s one of the perks.

What is the most challenging moment in the trilogy?
For me that’s now, the bit before I start. For the audience perhaps it’s the chair sequence in second show. Those who have seen it will understand.

Describe your ideal audience member.
Anyone who enjoys taking a risk in good company.

What’s next for you?
Directly next will be The Self Trilogy at MAC in Birmingham on the 28th of September. Then I’m working on a new (solo) show and hopefully a tour of the trilogy.

The Self Trilogy is on in Bristol Old Vic Studio 11-14 Sep. You can watch the trilogy on Sat 14 Sep from 6pm. Find out more here.

Here’s the latest article from Bristol Evening Post‘s series on the redevelopment of the theatre. This month’s piece, written by Natalie Hale, focuses on the backstage rehearsal spaces. Photos by Farrows Creative.

Backstage in the rehearsal rooms of the Bristol Old Vic, acting royalty from Peter O’Toole and Dame Judi Dench, to Daniel Day Lewis, Pete Postlethwaite and Leonard Rossiter, have painstakingly learned lines, gesticulated, argued and shed blood, sweat and tears to create productions fit to perform before an eager Bristol audience. A rehearsal space is much more than just somewhere to run through lines or walk through the staging of a play. They are effectively like the “womb” of a piece of theatre – the place where ideas get turned into reality; where a play gestates and grows. 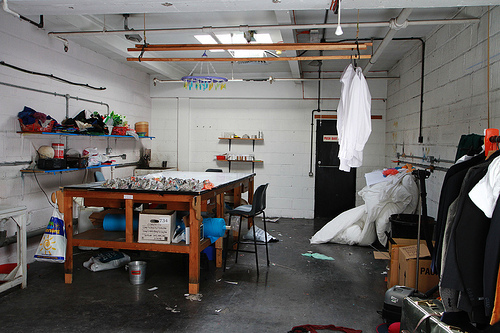 The old wardrobe laundry and dyeing room. Therefore it’s vitally important that rehearsal spaces are comfortable and fit for purpose. Perhaps surprisingly, considering the high-profile actors who have tread the boards and the acclaimed productions that have appeared on its stage, the Old Vic’s rehearsal space has been pretty inadequate – little more than a concrete box in fact. This is why the area is undergoing a major revamp as part of the theatre’s massive redevelopment project. Executive director Emma Stenning explains:

Our main rehearsal space, which is the same size as the theatre, was basically a box with terrible acoustics and a hard floor which made it very difficult to rehearse movement or dance. It was also very cold.

The rehearsal space is important to actors. If the acoustics and the floor aren’t anywhere near what it’s actually like to perform on the stage, then it’s almost impossible for artists to get a sense of what the show will be like.

I guess it’s like any working environment – you want it to be as comfortable and conducive to being productive as possible, otherwise the end product will more than likely not be the best it could be.

Rehearsal room. Work is currently under way to make dramatic improvements to the rehearsal area to ensure it is fit for purpose.

By converting the old wardrobe area, we’re effectively doubling our rehearsal space provision. We’ll be installing dance floors, raising the height of the ceiling and installing new skylights. There will be improved heating and technical facilities in these spaces too.

Basically, we’ll have spaces fit for the 21st century.

To make room for the increased rehearsal space, the wardrobe has now moved into a purpose-built workshop on Albion Docks. This dockside area also houses the theatre’s production department consisting of carpentry, metalwork, props, scenic painting, lighting and sound. In addition to being more spacious and comfortable, the new rehearsal area will also be better used. The King Street theatre will be able to welcome more artists to work at the Old Vic, so as well as rehearsing its own productions, it can also house the multitude of artists developing work through Bristol Ferment, alongside the theatre’s resident company Firebird. It is also possible that performances could be staged in the rehearsal spaces.

Dressing room. The contractors have been working on this backstage area for a couple of weeks now, and Emma tells me that it’s proving to be a huge undertaking.

The walls have been knocked through and the roof has been removed, leaving just planks of wood for a ceiling.

There’s more demolition work to do to that part of the building before we install a new ceiling and skylights but then quite soon it’ll all begin to take shape. At the moment, it’s essentially a shell.

As one would expect from such an historic building, it’s not simply a process of demolition and renovation. As work continues throughout the theatre, fascinating discoveries continue to be made. The most recent is an area called the ‘Royal Loo’, where the actors used to wait before going on stage and which intriguingly features graffiti from 1859. Emma explains:

This is a tiny part of the backstage area just off the main stage where actors used to wait before they were called on stage.

We’ve found an extraordinarily detailed line drawing of ship which we like to think someone probably drew over a period of weeks as well as people’s names etched into the wood.

We’ve also discovered a door from the 18th century at the back of one of the boxes. This is where rich patrons would pass through at the end of the show into the backstage area to meet the actresses.

We don’t know exactly what happened when they did meet, but we do know that the definition between actress and prostitute was somewhat blurred in those days!

Another revealing discovery that further brings the theatre to life, is a mark where generations of actors have lent their hand on the pillar before going on stage.

Yes, there’s a pillar on the side of the stage where the actors would stand before they went on stage, and there’s a big greasy mark where their hands would rest as they leant on it watching from the wings.

It gives a great sense of the history of the theatre, thinking that generations of actors have stood in the same place, waiting for their call, watching the action of countless plays unfolding beyond the curtains.

We’re so used to hearing the glitzy stories of actors and shows and the public face of the theatre, so it’s lovely to be uncovering these private little moments of waiting before stepping out into the spotlight.

Bristol Old Vic is the longest continuously-running theatre in the UK.

Our mission is to create pioneering twenty-first century theatre in partnership with the people of our energetic city; inspired by the history and magical design of the most beautiful playhouse in the country.

We strive to be welcoming, professional and boundlessly curious; playful, ambitious and rigorous; resourceful, honest, and generous; collaborative, Bristolian and world class.